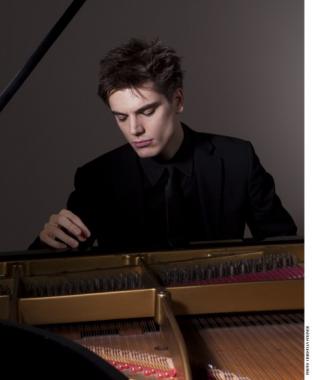 Very regrettably Anna Fedorova has been forced to cancel her concert under doctor's orders. We hope that she will make a quick recovery.

At very short notice Andrew Tyson an American pianist with strong links to Sir Mark Elder and the Halle Orchestra, has offered to replace her.  The programme has had to change to fit in with Andrew's recent performances, but he has come up with a seriously beautiful and unusual selection of pieces by Ravel, Albeniz, Scarlatti , Liszt and two early 20th century composers, Federico Mompou (1893-1967) and Cecile Chaminade (1857-1944) who many may not know but who produce very interesting and moving works for the piano.

Winner of the 2015 Géza Anda Competition in Zürich, as well as the Mozart and Audience Prizes, Andrew Tyson is quickly establishing himself as a distinctive and important musical voice. He performs regularly across Europe, North America and further afield with orchestras such as the Hallé, Moscow Virtuosi, National Orchestra of Belgium, North Carolina Symphony, Osaka Symphony Orchestra and SWR Symphony Orchestra Stuttgart. In recital Tyson performs in venues including the Kennedy Center in Washington, DC, London’s Wigmore Hall, Hong Kong City Hall and the Zurich Tonhalle. He has released two discs on the Alpha Classics label including the complete Chopin Preludes and works by Scriabin and Ravel.

We would like to apologise for any inconvenience caused by this unavoidable programme change but we can assure you that the quality of the playing and the music will be undiminished.  It is certain to be a wonderful evening of music.