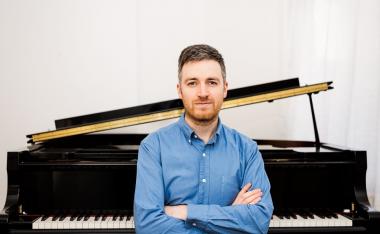 AGM before the concert at 7.00pm

AGM before the concert at 7.00pm

A brilliant young pianist, Richard Uttley came to play for us in  2013 as accompanist to the clarinettist/composer Mark Simpson with whom he has since recorded for TV and radio.  He has also performed and toured in China and Columbia with the trombonist Peter Moore who played here a year ago.

His playing is frequently broadcast on BBC Radio 3. Richard won the British Contemporary Piano Competition in 2006 and has since performed extensively, as recitalist and concerto soloist, at venues including Bridgewater Hall, Cadogan Hall, Royal Festival Hall, Queen Elizabeth Hall and Wigmore Hall.

Richard read music at Clare College, Cambridge (graduating with a double first in 2008) and studied with Martin Roscoe at Guildhall School of Music.

You might expect a concert full of ghosts and reflections to be pale and melancholic. In fact the predominant tone was sumptuous and glittery and virtuoso. Uttley seemed diffident and mild in his pre-concert chat, but once seated at the piano be became a different person, seizing the music with amazing decisiveness.
Ivan Hewett, The Telegraph